Exotic vacations in France: embark on a world tour

As the health crisis seems to fade, countries have increasingly reopened their borders and travelers are ready to explore new horizons. But the years have passed and tourism habits have changed. YouGov Global Travel Profiles surveyed 17,000 people across five countries about their travel plans. The result: 60% of French people surveyed want to explore France for vacation. In 2019, they were 56% to opt for France. While the Atlantic and Mediterranean coasts as well as the Alps and Pyrenees are the most popular destinations for seasonal activities, France is full of foreign-looking horizons. Get ready for a real world tour for an exotic vacation in France. From the Sahara desert to Canadian lakes, focus on the most exotic French sites.

A change of scenery in France...in Africa

The Great Mosque of Paris 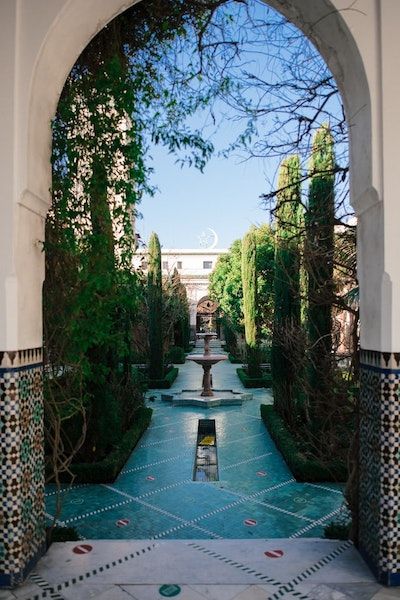 In the heart of the capital, a jewel of Hispano-Moorish architecture opens its doors to you. Inspired by the el-Qaraouiyyîn mosque in Fez, Morocco, the Great Mosque of Paris was built between 1922 and 1926. It pays tribute to the 100,000 Muslims who died for France during the First World War. In the heart of the Latin Quarter, the religious building houses lush gardens with pools of brilliant turquoise. Soak up the soothing atmosphere over pastries and mint tea before relaxing in the hammam (for ladies only). Contemplate the 33m high minaret inspired by the Zitouna mosque in Tunis and the various mosaics that adorn the entire monument. After a visit to the library of the Great Mosque of Paris, you will leave enriched and completely changed by your visit.

The dune of Pilat

At the gates of the Arcachon Basin, the Dune du Pilat offers itself to you. With a fine sand drawn by the wind, the 3km of Aquitaine dune look like the Sahara desert. On the edge of the Landes forest, the largest sandy formation in Europe overlooks the Atlantic Ocean from its 110 meters high. Forget the arid climate of the Sahara desert which can exceed 50? and enjoy the iodized breeze of Gironde. For a change of scenery in France, go to the Baccara Lodge, 1h30 from the Dune du Pilat. Classified as a Grand Site since 1978, don't miss the natural jewel of the dunes of Pilat!

A change of scenery in France...in Asia

The Khánh-Anh Pagoda of Evry

It attracts all the eyes of the motorists of the N7. From the top of its hill, the Buddhist pagoda of Evry is the largest in Europe. After 25 years of work, the building was inaugurated in 2016. Since then, believers and visitors come to the Khanh-Anh pagoda to find a little bit of Vietnam in Ile-de-France. Ochre-colored walls, a glazed roof from China: open your eyes wide and appreciate an architecture rare in France. Explore the 3,300m² sanctuary and contemplate the imposing Buddha statue at the back of the meditation room. At 4 meters high and covered with gold leaves, the statue made in Thailand welcomes offerings. The smell of incense omnipresent in the room will plunge you all the more in a spiritual and meditative atmosphere. High place of Buddhism open to the world, relax in this haven of peace just a step from Paris.

The oriental park of Maulévrier

A piece of Japan...in Maine-et-Loire! The largest Japanese garden in Europe, the 29 hectares of the Oriental Park of Maulévrier welcome you in a soothing setting. The site is inspired by the Edo period (late 17th to early 19th century). Stroll along the river or stop under the cherry blossoms for a spring picnic in the Japanese tradition of Hanami, a custom explained in the video below. Each season offers a different face to the 400 plants in the park. Embrace the Japanese culture by strolling through the park or by participating in one of the many workshops offered throughout the year. Origami making or meditation discovery are on the program. Do you like night strolls? The park is adorned with its most beautiful lanterns for one night every Saturday. Stroll through a poetic park by day and night.

A change of scenery in France...in America

The Colorado of Provence 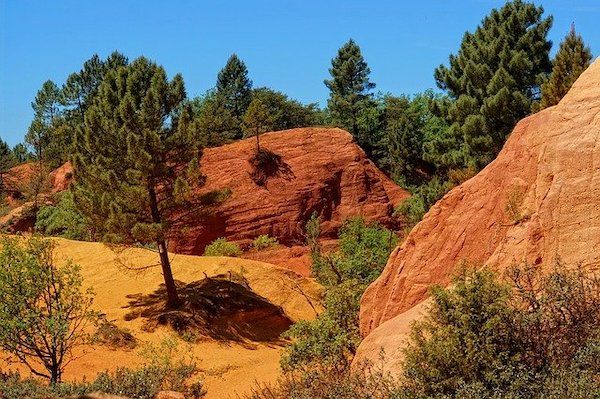 In the middle of the Luberon, it looks like an American desert. If the American landscapes of Colorado are naturally formed, it is not so for the Provencal site. Originally an ochre quarry, the landscape has been shaped by the work of workers since the 17th century. As you walk along the path, you will discover some vestiges of the past: old pipes, wagons, engines, all markers of the industrial history of the site. To protect the Colorado Provençal, it is forbidden to venture beyond the beaten track. For this reason, two routes are proposed. The Sahara path is the most popular, it will plunge you into the heart of the ochres, you will be able to observe the bright colors and the formations of the quarries up close. The Belvedere path, more difficult to access, overlooks the landscape. It will offer you a breathtaking panoramic view of the entire site. After an American escapade in the Colorado Provençal, relax at the Mas des Écoliers.

The lakes of Bresse

Direction Canada and its great lakes...or rather the Vosges! The French region also abounds in some beautiful lakes that one would almost confuse with the Canadians. The ten hectares of the Lac des Corbeaux are a good example. The surrounding fir forest gives the water of the lake particularly dark reflections. The lake is the ideal place for a relaxing outing. At an altitude of 887m, explore the forest or simply walk around the lake. Picnic, fish, and even go scuba diving to discover the nature of the lake. Not far from there, the lake of Lispach and its impressive peat bog. To get a closer look, take a walk along the paths built on stilts. Try to identify the fauna and flora of the place and go in search of pearly cranberry butterflies and carnivorous drosera plants. Conquered by the lakes of Bresse? Here are 6 ideas for relaxing stays by a lake.

A change of scenery in France...in the four corners of Europe

The Cathedral Saint-Nicolas of Nice 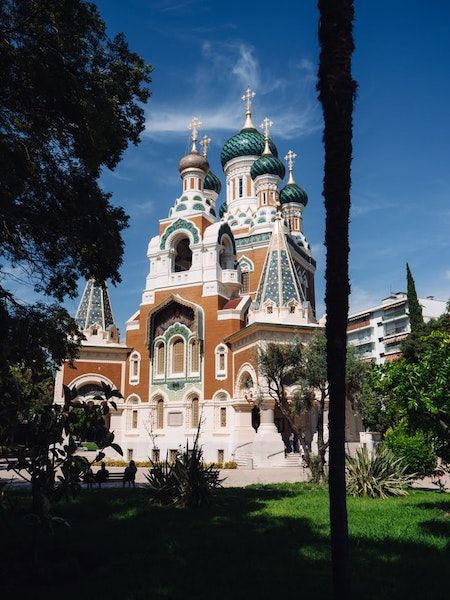 While one could compare Nice to Italian cities for its architecture, a Russian Orthodox church stands out in a Mediterranean setting. Inspired by the famous Saint Basil the Blessed cathedral of Moscow, the Saint-Nicolas cathedral of Nice impresses by its bulbs, its gilding and its multiple mosaics. Among the largest Russian Orthodox buildings in the world (outside Russia), St. Nicholas was inaugurated in 1912. High place of stay for the imperial family, Nice welcomes a growing Russian community during the second half of the 19th century. When Tsarevich Nicolas, son of Tsar Alexander II, died, it was decided to erect the cathedral in his honor, right next to the place of his death. Nowadays, 200 000 people visit the cathedral every year. The interior of the cathedral will not leave you indifferent. The building is adorned with luminous frescoes in blue and yellow colors and its most beautiful icons. In the heart of Nice's Russian quarter, you will be immersed in the history of the city. When the Russian aristocracy settled in the French Riviera.

Nicknamed "the little Venice of the East", the Alsatian city has an Italian feel. Visit the old town by boat on the canals of the Lauch River. Colmar's colorful half-timbered buildings will remind you of German villages. Take a stroll to find the most emblematic houses of the city, such as the Pfister house which largely inspired the sets of the Japanese movie The Moving Castle. During your stroll, you might come across a well-known Belgian boy: the Manneken Pis. A replica of the famous statue was donated by Brussels in 1922 for the fourth anniversary of the liberation of Colmar. Move away from the city center to meet another statue from across the Atlantic. The Statue of Liberty stands at the entrance to the city to welcome its visitors, just like its big sister in New York. Its presence pays tribute to its sculptor Auguste Bartholdi, himself a native of the city. As you can see, Colmar will make you forget that you are in France.

Fancy a trip to the end of the world? You don't need to travel thousands of kilometers to feel out of place! Architectural jewels or natural wonders, a vacation in France will reveal its most unsuspected landscapes during a (mini) world tour.