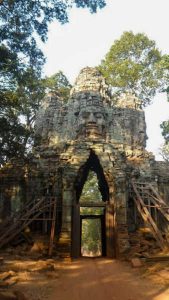 Few destinations are as authentic as Cambodia. World famous thanks to the archaeological site of Angkor, classified as a UNESCO World Heritage Site since 1992, the country offers its visitors a multitude of opportunities to awaken their senses. With its history, culture and postcard landscapes, the kingdom is undoubtedly a destination in its own right. To discover its richness, it is best to get off the beaten track and discover Cambodia differently.

Melanie and Nathalie are the founders of Siem Reap à la Carte, our historical partner for a tailor-made Ethik Trip in Cambodia. Today they propose us an article to present you several alternatives to the temples of Angkor. The latter are indeed superb but victim of mass tourism. The country is full of temples and other historical sites so you have a lot of choices to discover the Khmer civilization without queuing with other tourists.

1. The consequences of mass tourism on the sacred site of Angkor

The consequences of mass tourism on the sacred site of Angkor

More than 6 million tourists visited the temples of Angkor in 2019, a success that threatens the vestiges of the Khmer empire that suffer from the ravages of time and degradation. An over-visitation with dramatic consequences: pollution, traffic jams and deterioration of the site. Doesn't it remind you of anything? These are the same evils that we mentioned for Halong Bay, also a victim of overtourism.

The largest archaeological site of Angkor in the world has become a must for a must for foreign visitors, but the influx of tourists poses new problems to the preservation of the buildings already by the invading tropical vegetation and the monsoon rains. monsoon rains. The incessant trampling as well as the pollution generated by the by the traffic of vehicles of all kinds erode the sandstone erode the sandstone, damage the roots of the trees and the fingers damage the bas-reliefs. The experts are also very worried about the depletion of the local water table, because of the strong consumption of water of the tourists.

Faced with these facts, the Cambodian government as well as the private sector private sector are trying new approaches such as community tourism, agrotourism tourism, agrotourism, the development of new activities and a campaign to and a campaign to clean up the town of Siem Reap. Great progress on the road network in Siem Reap, which will have a new look in the next few months.  a new face in the next few months. All of this with all of this with the objective of helping the many visitors discover Cambodia in a different way.

The perpetual renovations Every day hundreds of buses drop off streams of tourists on the main temples temples such as Angkor Wat, the largest religious monument in the monument in the world, in front of which a temporary footbridge had to be built to to replace the weakened bridge which will require 5 years of restoration. restoration. At Ta Prohm, which was used as a set for the movie Tomb Raider, the temple has become a curiosity, today, it is being Today, it is being renovated like many other sites. A success that can be devastating, indeed millions of tourists who walk on the  tourists who walk on the roots end up killing them. This is followed by the collapse of entire walls that were supported by the trees. On some sites, restoration is underway and access to the temple is completely completely closed to the public. At the moment there are about ten  work sites on the entire Angkor site. 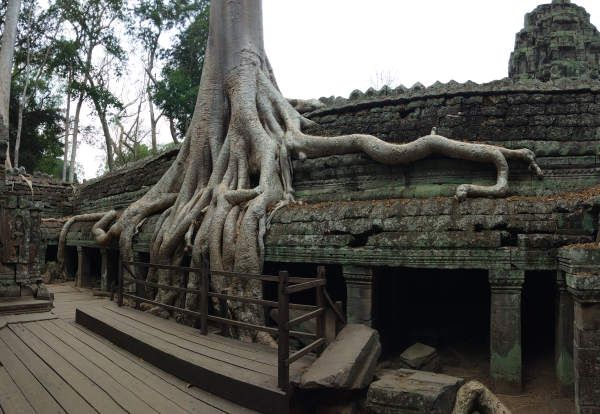 Calm during the pandemic

Without a doubt, and as for many tourist sites on the globe, the pandemic has allowed their very rare visitors to discover or rediscover these architectural gems from a privileged angle. The publications on social networks of travelers or locals alone in the middle of these hundred-year-old stones have flourished everywhere. Being alone in the majestic temple of Angkor Wat is not an event that is likely to happen again. However, the question arises whether this is a good or a bad thing, especially when we know the disastrous consequences that the closure of the borders had on the economy of Cambodia...

In order to avoid repeating the mistakes of the past, and as much as possible, the Cambodian government has decided to act by finding a compromise through a management of flows that would allow to limit the number of visitors on the most popular temples while maintaining authentic visits. Let's hope that this awareness of the authorities will be the most beneficial for all.

The alternatives to Angkor to discover Cambodia differently

Phnom Kulen (which literally means Lychee Mountain) is a large massif located less than two hours drive from Siem Reap. This extraordinary and very popular site will certainly seduce you. It offers exceptional landscapes, legendary history and immersion in the local life.

Phnom Kulen is an important pilgrimage site in Cambodia and is considered one of the most sacred great mountains in the country. It is said that it was here that the former king Jayavarman declared the country's independence in the 800s. Its waters are reputed to be very pure, they even cured the king of leprosy according to the legend. So take advantage of it to sprinkle yourself with sacred water and make a wish, maybe it will come true!

Its waterfalls have become a popular meeting point for locals to share a picnic by the water.

Taking a walk on the Tonle Sap Lake is a must-do activity during a visit to Siem Reap if you want to discover Cambodia in a different way. The lake is located about 20 kilometers south of the city. It is not a question here of Cambodian houses on stilts but of floating houses which move 3 times a year according to the floods and the ebb and flow. 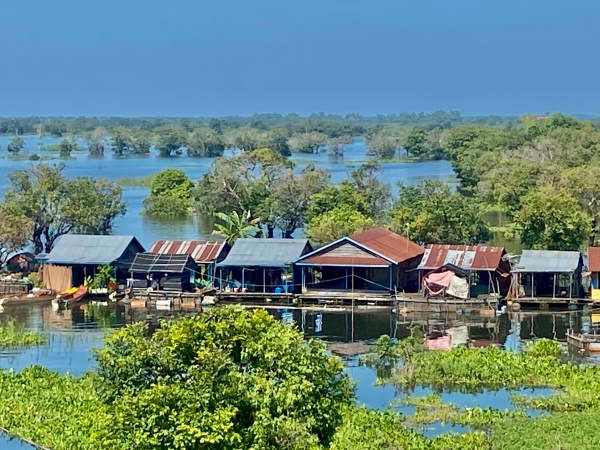 The sweetness of life on the water

260 families live on the lake, about a thousand inhabitants, mainly fishermen.

The daily life of its inhabitants is articulated in this village on the water and within this small paradise of fishermen that is the Tonle Sap designated Biosphere Reserve by UNESCO in 1997. The bird sanctuary of Prek Toal is home to the largest colony of aquatic birds in Southeast Asia (more than 150 species), a real fantasy for birdwatchers!

The floating villages have been given a makeover

Living conditions on the lake are harsh, the villages have no electricity, running water or sewage disposal. The waste used to be burned or dumped in the lake. Since June 2020, the Tampaing Snong Russey Foundation has implemented a project called "plastic for rice" so that each family learns how to properly dispose of its waste. It encourages individuals and communities to play an active role in protecting the environment and the Tonle Sap in particular.

Often confused with the villages of stilt houses also based on the Tonle Sap and overexploited, the floating villages remain, to this day, spared by mass tourism or even confidential...

The temple of Preah Vihear, in the north of Cambodia, is endowed with an exceptional geographical situation, on the border between Cambodia and Thailand. It consists of a series of sanctuaries that make this place unique. Built between the 10th and 13th centuries, this temple was for hundreds of years a monastery and a very important place of pilgrimage. important pilgrimage site. Today, you will be able to appreciate its sumptuous architecture, relatively different from the other Khmer temples. The  Cambodians consider Preah Vihear as a real architectural treasure. architectural treasure. It is a particularly well preserved temple where you can admire the decorations where you can admire the decorations that appear on its monumental towers. The temple of Preah Vihear is classified since 2008 with the world heritage of humanity by UNESCO and a must for all those who wish to discover Cambodia in a different discover Cambodia differently.

A global vision of Cambodia and Thailand...

In 1962, after many battles between Thailand and Cambodia to appropriate the site, its sovereignty was finally restored and confirmed Cambodian. The temple is located at the top of the Dangrek mountain range, which delimits the natural border between these two countries. Culminating at more than 500 meters of altitude, you will enjoy a spectacular view on the Cambodian nature, but also Thai. What to dazzle you!

This archaeological site, much less visited than Angkor, was the capital of the Khmer Empire between 928 and 944, just before Angkor was. This gigantic pyramid still impresses today the most curious travelers who choose to go there.

A unique site lost in the forest

From the top of its 36 meters the pyramid of Koh Ker is the central piece of a complex of 16 temples. It arouses, not without surprise, the greatest interest of the visitors who can stroll in the middle of the trees and the vegetation to discover the numerous satellites. These temples are of Hindu religious influence, characteristic of this time. 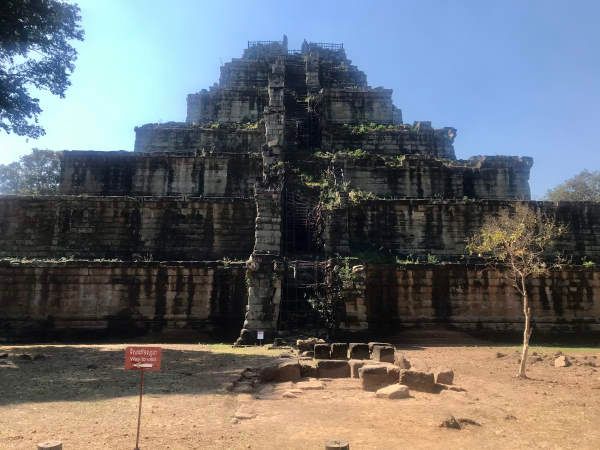 The highlight of the visit

It is at the end of a certain physical effort, and once reached the top of the pyramid (called Prang - name of Thai origin), that the visitors will have the privilege to observe the unspoilable view on the nature and the luxuriant forests which surround this temple. It is advisable to arrive at the site as early as possible in order to climb the six floors under still acceptable temperatures.

Recently included in the Angkor pass, the temple of Beng Mealea remains for the moment preserved from the hordes of tourists. Located not far from Phnom Kulen and 42km north of Siem Reap, this complex was the main filming location for Jean Jacques Annaud's movie "Two Brothers". Film lovers will recognize this green theater where nature has long since reclaimed its rights.

A city out of time

The many similarities between Beng Mealea (which means "lotus pond") and Angor Wat make some historians think that the latter is a large-scale replica. Here, time has stopped but nature has continued to proliferate. Indeed, roots and lianas continue to invade the temple giving it the mystery of a secret place, hidden, lost in the middle of the jungle. However, you will be able to visit it safely thanks to the wooden footbridges which were installed inside the ruins and which allow the travelers to be near the bas-reliefs and other Hindu and Buddhist representations of the temple. No doubt you will feel like an adventurer if you go to Beng Mealea.

These few examples will certainly have made your mouth water and given you an irresistible desire to discover the wonders of Cambodia differently.

The train is more than a means of transportation, it is almost a state of mind. It’s a beautiful way to give as much or more importance to your journey as to your destination. The epitome of slow travel and ecological, rail transport has shaped histo