Mass tourism in Greece: 5 alternatives away from the crowds

The year 2022 promises to be a historic year for tourism in Greece. 2019 was already considered extraordinary with 18.2 billion in revenue. This year the forecasters expect 20 billion. Three years ago this represented 33 million holidaymakers, that is to say 3 times more than the Greek population. It goes without saying that this mass of tourists is not without consequences on the eco system and the local population. It is also legitimate to ask if one can still find preserved places in the heart of the Hellenic Republic. The answer is yes. Follow the guide!

Greeks in the front line

As in many countries or regions victims of mass tourism, the first to be affected are often the inhabitants themselves. Indeed, the influx of a mass of tourists in a zone unfortunately leads to an increase in prices that the inhabitants cannot bear.

The desertification of city centers

We have already talked about Venice, which is also a victim of overtourism, the massive arrival of travelers leads to significant increases in rent. Indeed, with the development of seasonal vacation rentals, it often becomes more profitable for owners to rent in this way than to rent to the inhabitants themselves. The latter cannot bear the indecent rent increases (we have heard of +30% in certain cities) and are obliged to move to the outskirts to find housing. This is how the city centers become desertified: no more local shops, just souvenir stores. The city is emptied of its inhabitants and of its soul at the same time. 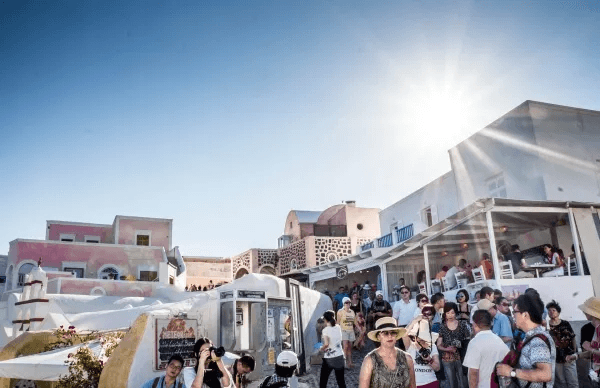 This impacts the inhabitants but not only. Seasonal workers who cannot find accommodation are forced to refuse certain jobs. And then, to top it all off, the tourist destinations find themselves short of manpower to welcome the horde of holidaymakers! The cat that bites the tail. To fight against this scourge, some city councils, like Santorini, give bonuses of 100 € per month to civil servants so that they can be housed

It's a paradox: never have they welcomed so many travelers and yet they will not be able to go and discover their beautiful country. And for good reason, the terrible law of supply and demand has made the price of seasonal rentals soar. With an average salary of 787 €, Greeks are no longer able to afford these extras. Except in some lesser known and therefore less frequented places like Astypalea which welcomes a majority of Greek visitors.

The impact of mass tourism in Greece on the eco systems

It is obvious that with such an influx of people, there is a lot of waste. Unfortunately, there are still places, especially islands, that are not equipped with waste management equipment. Many of them are therefore found in the Mediterranean Sea, which occupies the top of the sad ranking of the most polluted seas in the world. There would be 4 times more plastic in its waters than on the "famous" plastic continent.

We will never repeat it enough, the best waste is the one we do not produce. On vacation, as elsewhere, we must limit the use of plastic and other single-use packaging. To help you discover our article on zero waste vacations.

In 2022 Greece had estimated 5000 cruises or 25% more than in 2019. In Santorini alone there are 600 boats that throw ink and dump no less than 800,000 passengers on an island of 76 km / sq. Unfortunately, these floating buildings have the habit of leaving their engines on during the days of their stopovers. This creates a very high level of air pollution due to the exhaust fumes and micro particles.

Did you know that in the world tourists are concentrated on 5% of the territory? Greece is no exception to the rule with major influx points such as Santorini, as we have just mentioned, but also Mykonos, Athens or Corfu. It is obvious that such a large number of people in such a small space has impacts on nature. It is almost not possible in these islands to protect spaces and nature is inevitably the first to suffer. Don't forget if you have to go there to walk on the marked paths to give nature time to regenerate in the untrampled areas.

To go further: discover the 10 commandments of the responsible traveler.

Wildlife as a collateral victim

We are not going to mention again here the ravages caused by plastics wandering in the waters around the globe. Unfortunately, many articles have reported on the existing catastrophic situation. If you want to know more, we recommend this article on the impact of plastics on ocean pollution.

Another problem is the death of cetaceans due to collisions with boats. This represents 60% of the deaths of whales mainly but also dolphins and sperm whales. And mass tourism in Greece is partly responsible with the quantity of cruise ships present in this area. And these are, along with cargo ships and oil tankers, the main culprits of these fatal accidents.

The 5 alternatives to mass tourism in Greece

This island belongs to the Dodecanese archipelago. It is the junction point with the Cyclades. That is why you will find many architectural similarities. Moreover the Venetian fortress built overhanging the port, will make you think of Thira on the island of Santorini. But without the crowds!

Indeed, the butterfly-shaped island attracts mainly Greek tourists and in reasonable quantity. It is really an ideal place for a perfect vacation for all those who are looking for authenticity. 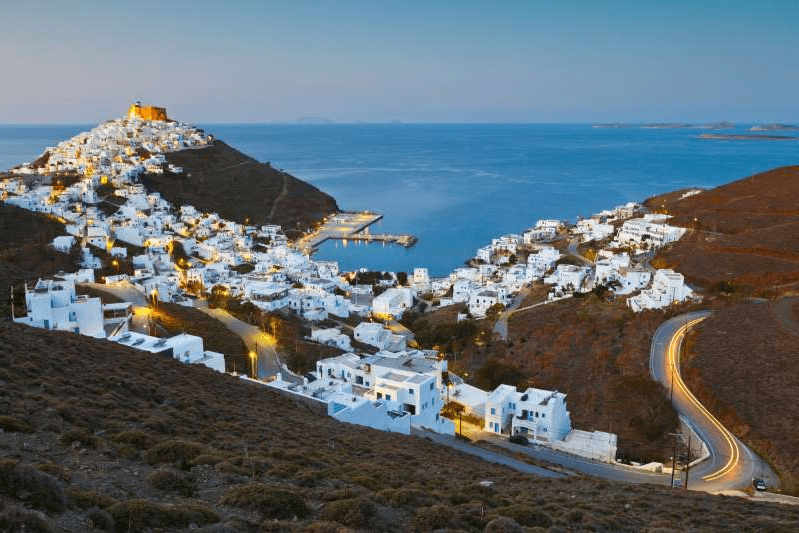 This island, which belongs to the Ionian Islands, has been known since antiquity and has managed to preserve its calm. It was, in fact, the scene of the reunion between Penelope and Ulysses in Homer's Odyssey after 20 years of separation.

Today, there are still several archaeological sites, typical ports and a calmness that is ideal for vacations. This makes it an ideal place for those who want to get away from mass tourism in Greece. 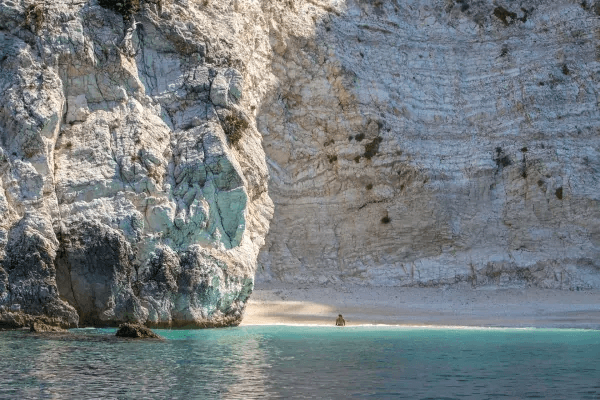 Fancy a city trip? Thessaloniki is the 2nd largest city in Greece and the capital of the Central Macedonia region. The city has kept a small town atmosphere and the inhabitants have the reputation of being particularly friendly.

Its ideal location also allows it to be the drop-off point to discover northern Greece: Pella, Verginia, Veria. This makes the city a must for any slow travel in Greece.

The archaeological park of Dion

If you go to Thessaloniki, don't miss the archaeological park of Dion. This is a sacred city of the Macedonians built more than 2500 years ago. It is dedicated to Zeus and was the witness of the sumptuous festivities organized by Alexander the Great.

Do you want to get to know the region even better? Go for a 2-day hike and climb to the top of Mount Olympus. It is the highest point in Greece at 2,917 meters. In mythology it is the domain of the gods, no more and no less!

According to the Guinness Book of Records, this is the deepest gorge in the world in relation to its width. So if you are a fan of nature spots, it would be a shame to miss it. Especially since unlike some places in Greece, here the vegetation is green and lush. A perfect contrast with the arid landscapes of the islands.

You will be able to enjoy your favorite outdoor sports: hiking, rafting, climbing, mountain biking... There is really something for everyone! 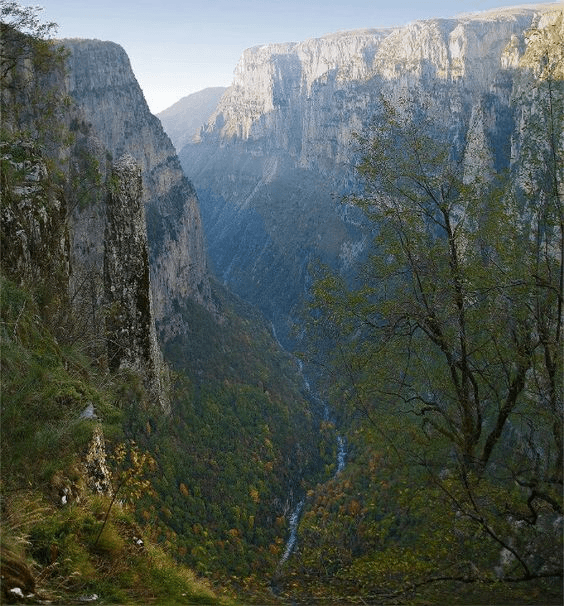 To go further, check out our 3 ideas in Greece off the beaten path.

Did we convince you to get off the beaten path and discover authentic and preserved places in Greece?

The first collaborative platform for access to sustainable tourism. Discover our eco-responsible accommodation addresses for your next vacation!
Tell me more!
The accommodations of the moment!
Right now in the spotlight!

Mass tourism in Greece: 5 alternatives away from the crowds

The year 2022 promises to be a historic year for tourism in Greece. 2019 was already considered extraordinary with 18.2 billion in revenue. This year the forecasters expect 20 billion. It is therefore legitimate to ask if we can still find preserved